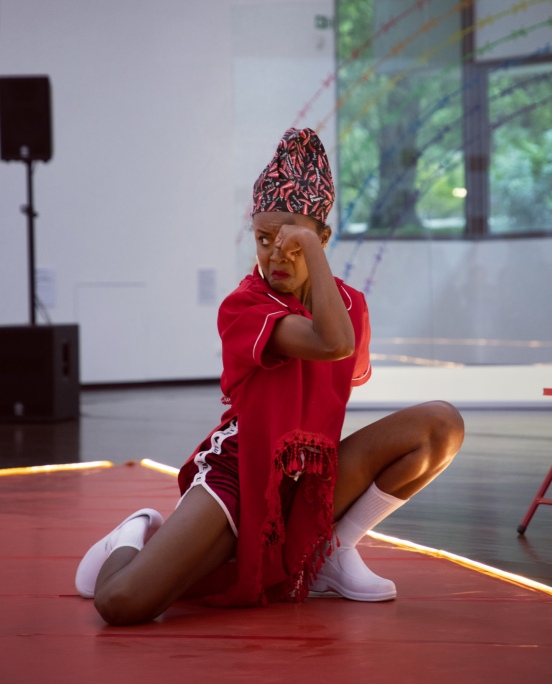 She creates, together with her auntie, the choregraphic piece O BΔNQUETE in 2019, commissioned by the Associação Videobrasil. In 2018 she creates COROA, a performance and installation for the Galeria Vermelho – São Paulo, also presented in Lafayettes Anticipations – Paris, at this same year she is awarded with the “Revelation Prize” in dance by the Cooperativa Paulista de Dança – São Paulo. In 2017 she creates NoirBLUE, a solo work for stage created with Jean Marc Segalen and Jideh High Elements, played in France, Portugal and Belgium, and also the Périphérie & Périphériques Project in collaboration with Lá da Favelinha – cultural center, where she is a partner for the dance. In 2015 she creates DRW2 for the Instituto Inhotim and in 2014 she creates Le Tour du Monde des Danses Urbaines, a project for the CDCN in France, with those interactive lectures she have been performing in Africa, South America and Europe, engaging transgenerational audiences from many social and cultural backgrounds, as well as multiple institutional organizations in over 400 presentations. Besides those main projects she develops the practice CORPO FIRME; danças periféricas, gestos sagrados and collaborates with artists in projects of diverse natures.

She has been crossing the world and drawing her professional experience, through programs of artistic residency, giving workshops on body, image, sacred gestures & periphery, or within the programming of international festivals as collaborator-performer and tours of her own work. She got invited as dancer creator for both future projects : the animation film Ana, en passant by Fernanda Salgado from Apiario and the film installation INFINITY minus Infinity by Anjalika Sagar & Kodwo Eshun from The Otolith Group. Currently Ana Pi is the choreographer associated to MAC VAL, museum of contemporary art of Val-de-Marne, and to La Briqueterie – CDCN, for the European project Dancing Museums : The Democracy of Beings.

{ She is also searching for her father, Julio Cesar de Oliveira, who is missing in Brazil since 4th march 2018 }